The United Nations Climate Change Conference (UNFCCC), which is known as the COP26, has been postponed due to the outbreak of COVID19.

This was the 26th conference of the UNFCCC and was scheduled to be held in Glasgow Scotland, the UK, on the coast of the Clyde River in Scotland between the date of 9 -19th November 2020.

Before this summit, the Pre-COP event of ‘Youth for the Climate’ in Italy has also been postpended.

This decision has been taken jointly by the COP Bureau of the @UNFCCC with the UK and partners Italy.

Tackling climate change remains a key priority for the UK and the international community.https://t.co/480CKVV3E1 pic.twitter.com/ugTAXt9iVT

The UNFCCC authorities declared that “We will continue working tirelessly with our partners to deliver the ambitions needed to tackle the climate crisis and look forward to agreeing a new date for the conference.”

The COP26 summit is the heartiest looking of the global environmentalists after the failure of the COP25 summit that was held in Madrid, Spain’s capital on 2-13 December 2019, by reason of confrontation and non-cooperation of the world’s largest power and carbon emission countries i.e. the United States, Russia, Brazil, Australia, China. 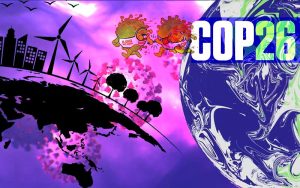 Certainly, the COP26 Conference was bothered by UK Prime Minister Boris Johnson himself.

The global Environmental Movement has progressed in the past 70 decades of the last century to keep Mother Earth inhabitable for human beings, by reducing greenhouse gases (GHG) to limit the increase of world temperature to 20C, from the temperature that was before 1750, before the end of this century, including preventing all other environmental pollution.

But immediately after the Nationalists and fundamentalist leaders like Donald Trump, Vladimir Putin, Scott Morrison, Bolsonaro, Shi Xinping, Boris Johnson’s becoming the throne of the world’s power, this movement has been facing confrontation since the Paris Agreement 2014.

In particular, Donald Trump himself has taken a standing against direct carbon-reducing emissions agreements and immediately after being elected the president of the United States, he announced an exit to the Paris agreement, which provokes other nationalist leaders as well.

As a result of this, we can see that the COP25 conference has failed, that took place in December last year.

Since the victory of the Conservative Party in the general election in Britain on 12th December 2019 and the takeover its power by Boris Johnson, the hopes of global environmentalists have begun to broke on account of COP26 and there are growing doubts about whether the summit will happen or not in a meaningful way is in question, and the dream of protecting the nature tolerant and livable is going to be grimy.

At the moment of the world’s environmental activists’ dreams were going to diminish, as the COVID19 Coronavirus pandemic takes over the world’s power as a whole.

Because of its precious rule over the world, it’s not fully stopped the world carbon emission but also the peoples are now busy hiding under their beds as like as snails.

It seems that nature has taken its responsibility of protecting itself at the moment in diminishing the ambitious aspirations of global environmental activists to protect its climate.

The COVID19 virus is not visible to the eye- with such a subtle thousand weapons, the human race has begun to avenge the pursuit that has continued for so long.

It is sadly, the superficial greed and denial of science, social responsibility and humanity of the extreme nationalists, Fanatical and regionals autonomous thinking people’s inferiors and notorious activities causes sufferings and deaths of the actual devotees, the real virtuous, the free and liberals thinking peoples and the environmental workers.

Now, nature is under repairing process and is going to flesh.

The Earth environment is on the way to fleshing that and it seems the postponement COP26 conference would never be required to hold in the near future.

Bihar: 26 People Killed In 24 Hours Due To Thunderbolt

Most people in the world have less chance of washing hands