Legal Notice to the Bangladesh Govt. Agencies for making a List of Sutang River polluters

The Bangladesh Environmental Lawyers Association (BELA) has issued legal notices to 20 government departments of Bangladesh to compile a list of industrial establishments occupying and polluting the Sutang River in Habiganj and determining the initial flow and boundary of the river. Among the notices received are four secretaries of the ministry of Bangladesh.

The notice said the Sutang River originated in Eastern India and entered Bangladesh through Deorgach Union in Chunarughat Upazila of Habiganj district. The 82-kilometer-long river flows through Habiganj Sadar, Lakhani and Chunarughat Upazilas and falls into the Kushiyara river. 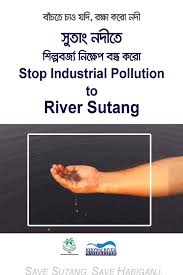 The Sutang River has played an essential role as one of the primary means of communication for the locals. Although there is no navigation in the dry season, boats and trawlers operate in the monsoon season. Agriculture is done using the water of this river during the boro season.

People of traditional religion used to bathe in this river at one time.

Beleshwari Banni (A Hindu religious festival) was held every year. Like other rivers of the country, the condition of this river is also critical. Occupancy, pollution, illegal sand extraction, and many other uses against the river threaten the existence of this river today.

Industrial wastes are polluting the Sutang River at Olipur in Shayestaganj Upazila of Habiganj. The water of the river has turned black due to the continuous pollution of industrial waste. The stench is spreading from the water. It has become difficult to move along the riverbank, and the river has become fishless due to the pollution. According to the country’s prevailing law, the concerned departments have failed to keep the river free from pollution.

The notice called for a complete list of all the industrial establishments occupying and polluting the Sutang River and demarcating the river as per the initial flow through the CS (cadastral survey) survey. Bella also requested the concerns feedback about the action taken regarding this matter within seven days of its notice. Failure to do so will result in legal action.

The role of environmental journalism in preventing ecological pollution is immense

Strategic environmental assessment is ongoing on to protect the Sundarbans- Environment Minister, Bangladesh

Demand for the punishment of river-reservoir destroyers