The forest department, along with the fisheries department of Char Fashion Upazila of Bhola District, has seized 21 barrels of shark oil and 10,000 pieces of dried-bodies of shark-cubs. Those were seized from the Maya Bridge area of Ahmedpur Union of the Upazila.

Upazila Officials seized about 10,000 pieces of dried shark-cubs and 21 barrels of shark oil during the operation. The concerned criminals fled away before conducted the operation against them as they knew it earlier. 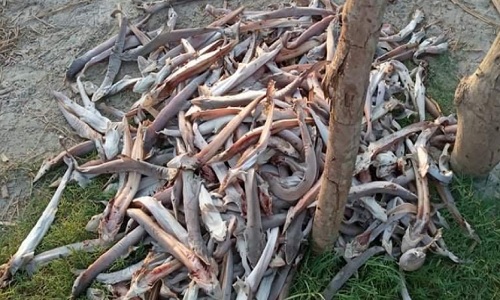 The information received from local sources made it known that a few gangs had been involved in hunting and oil processing from sharks after its catching from the sea. For a long time, these devil’s work is going on. After that, they smuggled the dried bodies and oil to the various parts of the country, including Chattagram, the port city of Bangladesh.

According to the Bangladesh Fisheries and Forest & Environment Acts, – these types of works are considered criminal offenses. “A case against the accused of this offense is also being prepared,” said Md. Aladdin Hossain, range officer of the Upazila Forests Department.

To protect the Amazon – The Brazilian government takes Steps

The Flood Situation in Bangladesh Has to Worsen; Thousands of People Are Distressed