The crop fields have become visible again in Bangladesh’s flood-affected areas as soon as the water has drained.

Various crops, including jute and paddy, have rotted because of staying underwater for an extended period. The farmers are heartbroken looking at the crops for that they worked so hard. They are worried about their livelihood.

Meanwhile, with the floodwater level down, there has been severe erosion in almost every riverside area. Many people are losing their homes and are being destitute. On the other hand, people have started to rebuild their houses after the water has drained. 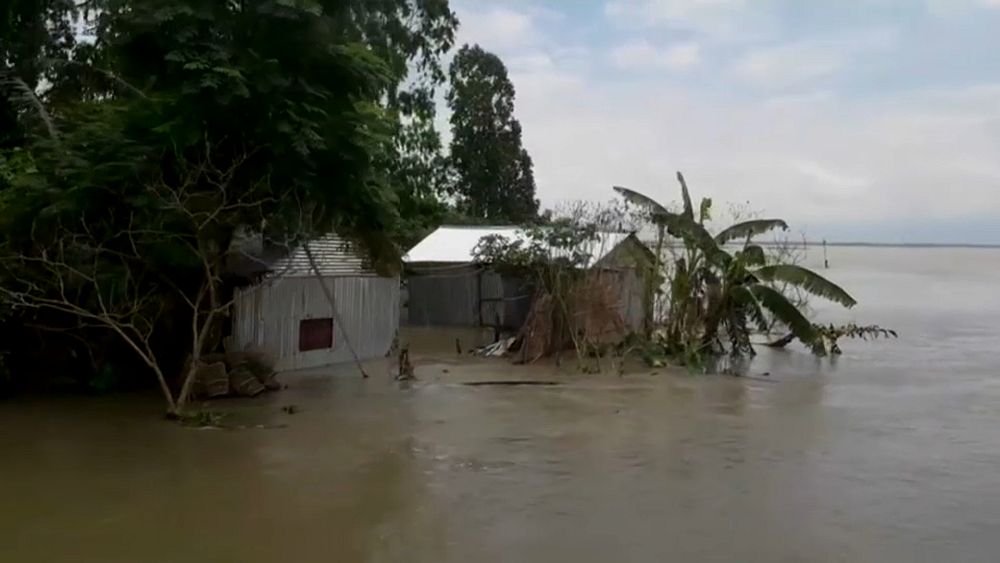 Many can’t rebuild houses for not having sufficient money. Though the relief goods distributed, there is still a shortage of food in the flood-affected areas. Many families are passing their days by fasting, or some are half fed.

Due to COVID 19, people suffer joblessness for many days and cause many families below the poverty line. People can’t even buy their meals to feed for the insufficiency of money. Relief goods are not available for everyone either. So, the flood-affected people are in great distress.

According to the Flood Forecasting and Warning Center of BWDB, the water level in various rivers has started rising again after draining in the last few days. The water of five rivers is now flowing over the danger level.

However, at the same time, the water level has risen in 39 out of the 101 water level monitoring stations. The previous day, water had increased at 27 stations. Although the Ganges-Padma water is draining, the water level of the Brahmaputra-Jamuna and Surma-Kushiyara rivers in the Upper Meghna Basin in the north-east is increasing again.

And this rise may continue till tomorrow. The water level of the Jadukata river has increased by 255 cm in one day at Lorergarh station. Concerned parties have expressed fears that many areas will be flooded again soon. Meanwhile, floodwaters are receding from the north-eastern districts, but new floods have occurred in the south-western part of the country. Benapole correspondent said that the southern part of the Shasha Upazila of Jessore had been submerged in the upstream water of the Indian Ichamati river.

Aus, Aman paddy, and other vegetables (Kharif II) were drowned. Water has started rising in many houses. According to the locals, the Ichamati river’s water has been rising for the last few days.

The water entered through the Rudrapur canal and flooded the ghats in the southern part of Shasha. Monir Hossain of Rudrapur village said the bill’s water level is increasing by half a foot every day.

Although there is a sluice gate at the mouth of the canal, it cannot stop the water. Anisur Rahman, Deputy Assistant Agriculture Officer of Kayba Union, said, “About 400 hectares of land around Kayba Thangamari, Awali, Gomar, Pantapara, Deyo and Mahisha Beels have been submerged.

This has caused severe damage to curry crops including Aus and Aman. The matter has been reported to the higher authorities.”

The flooded people are trying to repair their houses, but many suffer due to insufficient money. Meanwhile, thousands of farmers in 9 Upazilas of Kurigram district have been severely affected by the month-long floods.

Mostafizur Rahman, the Deputy Director of Agriculture Extension of Kurigram, said, “The floods inundated crops of 18,000 hectares of land including various vegetables, jute, transplanted Aman seeds and maize of millions of farmers.

Mr.Saidul Islam, UP chairman of Bhogdanga, Sadar Upazila, said, “All the crops of my union have been destroyed by three consecutive floods. Farmers are roaming for seedlings. Those who can afford it are bringing it from outside the district and planting it in the land.

On the other hand, river erosion has intensified over the last few days. People are helpless in this situation. Many have sold their domestic animals at a low price for the urgent need of money.” Siddique Ali Mandal, another UP Chairman, said,

“The flood reliefs are not sufficient to help all the affected families. They could have been assisted if more had been allocated.”

Mahmud Hasan, Sub-Divisional Engineer of Kurigram Water Development Board, said, “River erosion has occurred at 19 points in the district due to declining river water. We are quickly putting sandbags at those points and working on control.”

The floodwaters have receded from houses and roads. However, the floods have damaged more than 600 roads in the district, including rural roads and regional highways. Ditches have created in different places.

The road department is trying to make the regional highways suitable for traffic by throwing sandbags and bricks. However, no initiative has taken to repair the rural roads. The floods have caused severe damage to agricultural land and fish farms in Shariatpur.

More than five hundred bereaved families are seeking shelter. They are living under the open sky. In the last few years, about five thousand people in the district have become homeless and live in rented places.

The floodwaters of Munshiganj have started decreasing slowly. Due to the depletion of water, severe erosion has occurred in the villages along the Padma, Meghna and Dhaleshwari rivers.

The erosion of the Dhaleshwari river has also happened in Sirajdikhan. The floods have inundated 265 villages in 39 unions of the district. The crops of the land have ruined. One thousand seven hundred two ponds in the district have washed away.

Babui Bird (Weaver) with Enchanting buzz is on the Verge of Extinction in the Countryside of Thakurgaon, Bangladesh

Bangladesh Prime Minister’s 5 proposals to save the Planet