The mountains are unique territories for biodiversity, where there will be only animals, forests, birds, and wildlife. But over time, when humans entered the mountains, biodiversity began to become extinct. From that, the conflict between human with diversity began. Various species of animals, birds, plants, forests are declining. Habitats of animals are being destroyed.

Even the elephants of the forest are also enraged at the oppression of the people. So, almost all the time, there is a conflict between elephants and humans. Sometimes victory is for elephants, sometimes for humans.

This is how the life of the mountain is going on. Such stories spread across the three districts in Bangladesh, Rangamati, Khagrachhari, and Bandarban of the Chittagong Hill Tracts.

According to the Chittagong Hill Tracts South Forest Department, there were about 75 species of mammals, 100 species of birds, seven species of amphibians, and 25 species of reptiles in the hilly areas. But the number of wildlife habitats has reduced as wildlife sanctuaries are being destroyed. 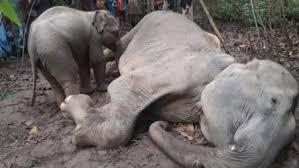 Especially Maya barking deer, sambar, monkeys, hyenas, elephants, wild boars, forest goats, different species of birds, and elephants are the endangered species. There are wild elephant habitats in Rangapani and Baghaichhari, Jurachhari, Langadu, Kaptai, Rajsthali, Kaukhali, Barkal, Naniyarchar and Bilaichhari areas of Rangamati Sadar Upazila. However, the Department of Forest has no statistics on how many elephants are there.

Elephant habitat is on the verge of destruction as people enter these areas. That is why there is a conflict between elephants and humans in the mountains.

Elephants in the mountains are facing a food crisis due to deforestation. This is why the group of wild animals attacks the locality almost all the time. The houses of the hill dwellers were vandalized. People are also using different traps to protect themselves from elephants. Thus this vast wild animal is on the verge of extinction from the highlands

The IUCN survey also said that there are two distinct categories of elephants. One kind is residential, and the other type is non-residential. The resident elephants are permanently live in Bangladesh.

The non-resident elephants enter Bangladesh from neighboring India and Myanmar and stay for some time before leaving again. However, most of the elephants in the Chittagong Hill Tracts are permanent.

The main corridors are among the Chittagong Hill Tracts – Kaptai-Barkal-Langadu and Kaukhali of Rangamati. However, there is a conflict between the two sides over the construction of human settlements by deforestation in these important elephant corridors. That is why elephants are dying in human attacks; on the other hand, people are dying in elephant attacks.

There are about 55 elephants in the area. People are currently building their settlements by cutting mountains in these critical corridors. At the same time, elephants are facing a food crisis due to deforestation. Elephants, however, do not change the way they move smoothly.

He added that the significant reason for the conflict between elephants and humans is human habitation on the elephant movement path. So almost all the time, the wild elephants damage people’s crops and houses in the mountains.

Again somewhere elephants are dying for humans. The Department of Forest is working to make people aware of these issues.

Scientists warns due to pollution effect the penis is shrinking

Bangladesh and Sweden will work together on climate change

Has there any success in stopping the Climate refugees’ procession?

Greta Thunberg has been re-nominated for the Nobel Peace Prize