The crocodile is an amphibian and moves like a human on four legs on land.

But from the recent track of well-preserved fossils in South Korea, experts speculate that the crocodiles might have been walking on two feet during the pre-season.

There is evidence of steep soil on the shores of a lake in South Korea back to the early Cretaceous, 110-120 million years ago.

The Cretaceous is the period between the Jurassic and the Tertiary, the warm-up of the topography – when humans did not arrive on Earth and dinosaurs ruled the land.

There is, however, a lot of considerable controversy in this discovery. The team that discovered it also thinks there is ample opportunity to challenge the idea.

Martin Lockley, an emeritus professor at the University of Colorado in the United States, described it as a crocodile’s footprint.

The study is sure to encourage lively debate. However, it could be the fossil of a camel or any other marine bird. If it is a crocodile, it shows our evolutionary beginnings.

Professor Lockley and his colleagues named the creature that created the tracks Batrachopus Grandis, although no anatomy has yet been revealed.

Recognition of the existence of animals depends only on the printing of fossils.

These are much larger in appearance but look very similar in shape, although the Barachopas crocodiles lived in the Jurassic era millions of years ago.

“Observing the footprints, the depth of the ankle supports the idea of a more upright posture of the animal,” said Professor King Su Kim, a team leader at Chinzhou National Education University in Korea. 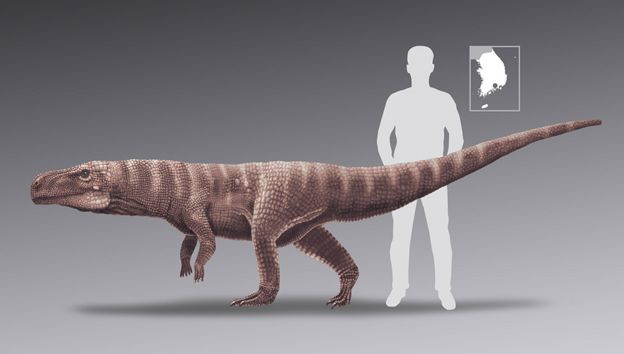 “Our trackways are extremely narrow – crocodile unbalanced on tight ropes,” he added.

He added: “These animals were bipedal and followed the same path as many dinosaurs, but the footprints were not made by dinosaurs.

Phil Manning, a professor at the University of Manchester in the United Kingdom, was not part of the discovery team.

As a fossil trackway expert, he described the prints as “very interesting” and welcomed their publication to begin discussions – but he was skeptical of the explanation.

“Unfortunately we don’t have fossil bones,” he said. So it is not possible to tell if it is a crocodile.

However, researchers will soon end this controversy.

A Mysterious Creature Found on the Beach in Britain

Spacecraft on an asteroid which is 200 million miles away: Will have to Know the secrets of the solar system, how life came into being

Renewable energy: Solar and wind power are not a threat to environmental pollution

Five asteroids are coming towards the Earth