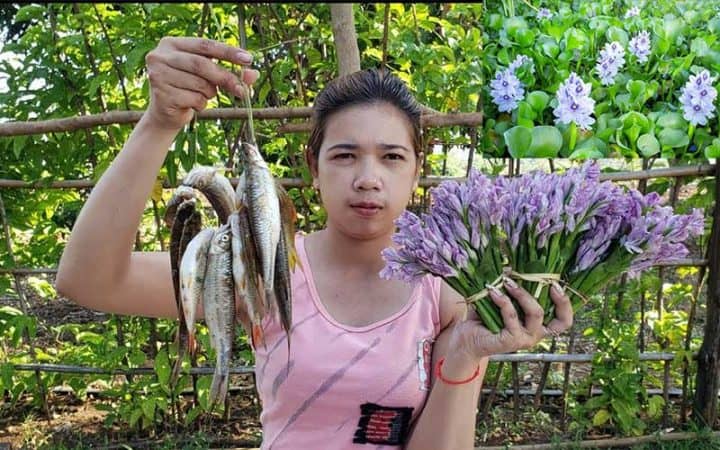 The effectiveness of Water Hyacinth as human food

Water Hyacinth (Bangla name Kachuripana)  is an aquatic plant. It is a fast-growing plant floating on the water. The scientific name of this plant is “Eichhornia crassipes”, it has been found all over the world and known as an aquatic nuisance.

Green parts of these plants are being used as Carotene-riches food in Taiwan in East Asia. The Japanese are using green branch pulses and flowers as vegetables in cooking and the Vietnamese are also eating fresh leaves and flowers as salads (Wikipedia) There has been a lot of research to take a source of protein-rich part of water hyacinth as human food.

Although, scientists have not been able to make such progress on it. One of the most remarkable researches in the study has been published on “The Egyptian Journal of Aquatic Research (Volume 4­2, Issue & September 2016, Pages 269-272).

From the research found that Water Hyacinth is safe and prospective food as human food. The findings and reviews of these studies are summarized as follows: The study was undertaken to transform an ecological disturbance like “Water Hyacinth” into economic development into a natural resource for human food. Finding from Research the water hyacinth crunchy leaves are contains most rich in protein.

From the analysis, found that Water Hyacinth Leaves Protein Concentrate (WHLPC), the amount of protein is 50% and carbohydrates are in 33% of its nutrients. The remaining 17% of the nutrients are fat, ashes and fibre.

The amino acid analysis found that 17 out of the 20 common amino acids in WHLPC, specifically, Phe (3.69%), Leu (5.01%). The levels of total alkaline and phallic compounds were found to be 0.5 mg/kg and 1.5 ml/kg, respectively. Also, WHLPC has been found safe for human health from Heavy Metal’s Analysis.

The outcomes of the research are in the following:

Significantly note that last 17 February, the Honorable Minister of Planning, Bangladesh suggested to the researchers that Water Hyacinths can be used as human food in a conference. At that same conference, he also advised researchers on whether the size of the jackfruit can be large and the skin can smooth handling.

Comparing the use of Water Hyacinths as animal food, the Honorable Minister may have intended to stimulate interest among researchers and suggest that what is safe as food for other animals may also be safe for humans.

But the compared animal is the cow that’s why it becomes satirical.  It becomes a humorous headline on the newspaper. Not only the newspaper but also YouTube, Facebook, even all the social media presented a sarcastic video on it.

Some of the parliament members of the Parliament in the National Assembly of Bangladesh presented the negative speech of the guidance of the Honorable Planning Minister on it. (The Samprotik Deshkal, Date; 22/12/2012).

Not only it offends the Honorable Minister, but it also undermined the exploration of alternative food sources for our future generation, causing severe discouragement among researchers.

Although Water Hyacinths (Bangla name kachuripana) have been recognized as an alternative diet in the study, such sarcastic propaganda will discourage people to use it as food in the future.

Now the great concern of the scientists is that, with the increasing population of the earth and to provide basic necessities of humans such as foods, cloths, habitat, and education, etc.  Forests, jungles, mountains, rivers, waterfalls, seas, are being occupied for those reasons.

In a day will come, the source of all these natural resources will be finished, at the same time, it has a devastating effect on the environment and occurring disaster. Then the food production rate will decrease as compared to the population increase and will not be able to the meetup food demand of the growing population.

That’s why within 17 goals it comes to the first goal in SDG, which is, 2: Zero Hunger.  We have not yet been able to achieve this world with free from hunger. There is a Hollywood science fiction movie named “Sci- fiction Logan’s Run” which is based on how will the human and food supply is coordinated in this world for future generations, in which there will be a magnificent difference between humans and food supply/production.

We are still now one-quarter of the 21st century but in the Sci fiction Logan’s Run showed in a period of 2300 century. It shows, when food production declined in 2300 century, in comparison to the world population, the Utopian society introduced a new rule which is when someone reached at the age of 30 years of old,  he/she well be killed by a shot to harmonization between food and human beings.

We certainly do not want our future generation to face such difficulties. That is why scientists are constantly researching the source of environmentally friendly alternative food to meet the growing food needs of the world.

The worldwide researchers are very much concerned about food resources for the future generation. They are continuing their research on it.

The natural resources of the world will be finished in the near future and at that time the growth of science-based agricultural production will be far behind to the population growth.

Remarkably, the earth is constantly heating up by greenhouse gases mostly. Methane is the third most powerful gas in greenhouse gases, which is 25 times stronger than CO2.

And one of the major reasons for the emission of methane is animals’ husbandry in order to meet the needs of humankind’s Protein, carbohydrates, fat, vitamins, sugars, etc. And these animals are mainly emitting methane gas from the dung and urine. As the world’s population growing continuously; besides animal husbandry are increased also.

Therefore, various studies are being conducted in different countries including America and Europe use seaweed as an alternative to beef, eggs, and milk as human food. Among them, the research of the scientists from Israel and the Netherlands has achieved enormous success.

The population density in south-east Asia is high as well as the growth rate is high as compare to the other part of the world. So as a small country like Bangladesh faces difficulties in food productions to meet the demand of the increasing population.

So, it is clear that Bangladesh will be facing a serious crisis in terms of providing food to such a huge population in the future in comparison to other countries of the world.

Therefore, it is very important for our future generations to research the emphasis on finding alternative food sources.

Dengue Is Spreading Alongside With Covid-19

About 50 numbers of Royal Bengal Tigers increased in the Sundarbans

Most people in the world have less chance of washing hands

The Bumper Yield of Potatoes In Thakurgaon

Farmers’ Hope of the Bumper Yield of Onion in Puthia