Crops are Sinking in the Continuous Rain Throughout the Week

The agricultural weather forecast of Bangladesh is telling that light to moderate rainfall will occur all over the country for the next few days. The sky becomes overcast with dark clouds almost every day in the afternoon. Hailstorms occurred in some places. Though the rain has brought peace in human life during this hot weather, it has become a foe of the ripen crops and the green mangoes in trees.

Farmers are worried that the paddy will be ruined due to waterlogging before the boro paddy (Kharif 1) harvesting starts in the field. The Haor (Wetlands) and low-lying areas are in the most danger. And the ongoing lockdown due to Covid-19 has added more to worries.

The farmers are facing a laborer crisis. In this situation, peasants are facing uncertainty whether they can harvest the paddy or they will be ruined in the fields.

Concerned people are saying that the farmers didn’t get a good price for paddy. Farmers all over Bangladesh were dissatisfied with that. And this year Coronavirus started spreading from March this year in Bangladesh. But the farmers are taking risks on their lives and going to the fields to harvest the paddy.

Because the people of the country depend on them for food. The harvesting process has begun from the past week of April. It will take 15 more days to complete. If storms hit the country, the paddy will sink and hailstorms can cause damage to the paddy in the fields. 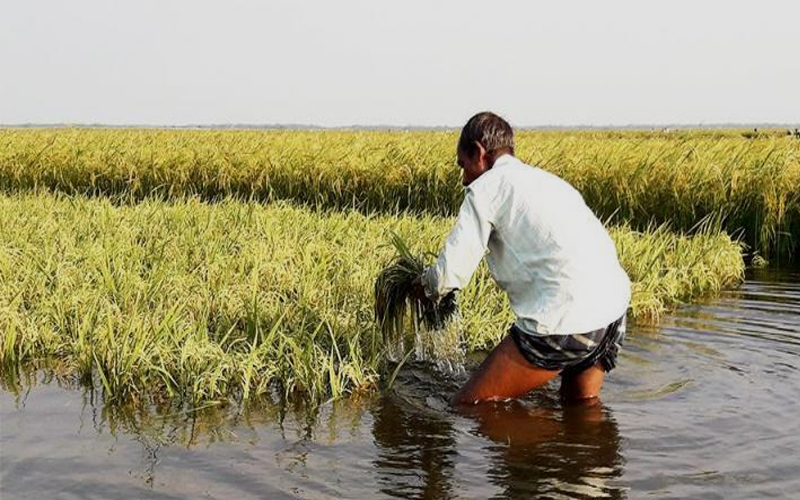 In Bangladesh, though the farmers cultivate crops using modern ways, they still follow the traditional method of harvesting. They still rely on laborers to harvest paddy.

Though the government has tried to evolve the machinery used for agricultural purposes in the past few years things haven’t changed yet. As a result, farmers can’t harvest crops quickly.

Water has started accumulating in the haors of the Greater Sylhet (the east-west region of Bangladesh). Paddy fields have already started to be submerged due to the rainwater in the low lying areas of haors.

The representative of Sunamganj (an administrative district of Bangladesh under the Sylhet region most of the Haors are lying in that districts) has reported that a farmer was seen cutting half-ripe crops in the waterlogged field located at the southside of Bishwambharpur under Sunamgonj, next to the crop protection dam.

The farmers said that the half-ripe paddy of their fields was submerged due to water flowing down from the highlands of the Haor due to it was rain last few days. That is why they are cutting half-ripe paddy.

The Department of Meteorology forecasts agro-meteorological weather from April 22 to 30. This week, Dhaka, Mymensingh, Sylhet, Rajshahi, Rangpur, Khulna, Barisal, and many parts of the Chittagong Division under Bangladesh will experience mild to moderate (4 to 10 mm per day) rain with temporary gusts.

If the forecast happens in real, the farmers are in great danger. In the current situation of coronavirus, to save the farmer and their field crops, it is necessary to make arrangements very fast for harvesting paddy with labor.

Paddy harvesting workers are not able to go all over the country without the necessary clearance due to corona lockdown. The number of those who are going is very low in numbers. For this reason, the students have to come forward and follow the instructions of the Prime Minister in order to harvest paddy quickly.

Agriculture officials say that the flooding of paddy fields by heavy rains does not mean the loss of farmers alone. All the people of the country will suffer later. Because of the coronavirus, there is a risk of famine around the world.

To prevent famine in Bangladesh, The Prime Minister has instructed all of the healthy people in the laborer crisis areas to come forward and stand by the side of the farmers and help them to harvest paddy from the lands as soon as possible.

Agriculture experts say that if people do not stand by the side of the farmers at this time, the danger will increase not only for the farmers but also for the country in the future. Covid-19 will make it difficult to import food from abroad.

For good reason, the government wants to keep the Boro season production right as well as produce more crops in the next cropping seasons. If rice production is low in any one of these reasons, the country will likely face food security threats.

Recently, the Minister of Agriculture, Bangladesh, Abdur Razzak hoped and informed Prime Minister Sheikh Hasina in a video conference with her

“We expect our yield to be higher in Boro season than last time. There are also the Aus and Aman (Kharif II and Robi) seasons ahead. At this point, we need to try to increase production.”

According to the Meteorological Department of Bangladesh, it rained in many parts of the country last Friday (April 24) afternoon. There has been hail along with rain. Rahman Munshi, a farmer in Narail district in the south-west of the country, said hail had fallen in his area with rain on Friday.

This has caused much damage to the crops. This situation has made most farmers worried. The farmers cultivate crops in order to maintain their livelihoods. But now if storms hit, it’ll bring danger for the farmers.

“Light pressure is created in the Bay of Bengal and the increase in light pressure in West Bengal, India, and its adjoining areas is causing the rain. It will rain once or twice a day throughout the week.

He said, “The farmers have been notified of the same forecast. The weather website also has a separate option called Agricultural Weather. There we provide week-long forecasts. This year’s continuous rain will be a cause of suffering for the farmers.

Because now is the paddy harvesting season. There could be hail somewhere. This will damage the rice paddy. Several more summer crops, including mangoes, will be damaged.

Air pollution in northern India has hit a 20-year low

Aman Planting has Exceeded the Target in Bangladesh, But This Time the Insect Attacks are More

Fish Farming Through Fences in the Flowing Mukteshwari River, Bangladesh

Farmers Affected by Floods and Corona in Gazipur, Bangladesh is Disoriented